The rack and pinion movement driven from an evacuated Bourdon tube, adjustment via Bourdon interrupter knife, the chassis beam struck with the Richard Frères logogram and serial no. “29985.”

All contained within a hybrid drum-stepped form case with extension post and suspension ring, calibration port to verso centre.

Condition: Appears clean, retaining much original lacquer to case, areas of losses, oxidation, marks and light abrasions, patination commensurate with a cared for antique. The dial with some very minor losses and marks consistent with age. The movement clean and crisp, showing much better than expected accuracy equal to or less than 0.05” across the scale, good resolution, stepless progression.

Interestingly, it would appear that, very early in its life, the movement has been changed. There is another set of mounting points visible on the verso which were clearly sited for a slightly different chassis beam.

Comments: I have worked on many of these instruments, and most, with the passing of time, have lost much of their accuracy. This instrument is by far the best performing of all those so far tested. The dial is a departure from the earlier instruments, attractive in its own way. The overall impression of this instrument is good – it conveys a sense of quality, some age and very passable condition.

The most interesting aspect relates to the “RF” logogram struck into the chassis beam. The rack and serial number are those of the earlier Bourdon & Richard production barometers manufactured under Felix Richard’s stewardship. After Felix died in 1876, his widow reported at that some 30,000 Bourdon barometers had been produced in the 25 years since 1851, which would make this serial number “29985” one of the very last. The business was carried on as Jules Richard Instruments by his son, Jules, who updated the design of the barometer movement, started a new serial number range, and marked these barometers with his “JR” logogram. Jules subsequently formed a partnership with his younger brother, Félix-Max, in 1882, and renamed the company Richard Frères, which used the “RF” logogram.

However, it is noted that the “RF” logogram appeared on barographs made by the company from 1878 onwards, before the commencement of the partnership, and thus we seem able to date this barometer to the transition period between those produced under Felix Richard, which carried twin Medallions on the dial and the “FR” logogram, and those produced by Jules Richard under Richard Frères, which had the updated rack, and which carried the new issue of serial numbers.

Most certainly an instrument for the collector or connoisseur alike. 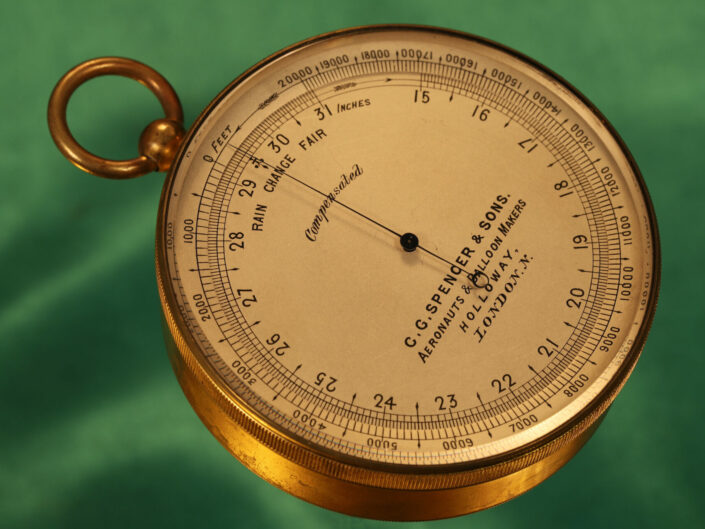